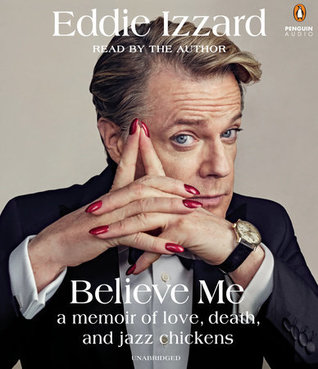 Believe Me: A Memoir of Love, Death, and Jazz Chickens

Author: Eddie Izzard
Language: en
Login to borrow
Critically acclaimed, award-winning British comedian and actor Eddie Izzard details his childhood, his first performances on the streets of London, his ascent to worldwide success on stage and screen, and his comedy shows which have won over audiences around the world. From Admin: I think I am naturally boring. Probably most of us are. Interesting people, too, probably decided at some point in life that they were boring and wanted to be more interesting" Believe Me: A Memoir of Love, Death, and Jazz Chickens is the autobiography of Eddie Izzard, an English stand-up comedian, actor, writer, activist, and aspiring politician. This is quite a funny book about his life, from the death of his mom, his 10 years trying really hard trying to make thing right until his career finally took off, and also his struggling about his own gender. Some other part that I also love in this book: "... These" pretty" people, when they're old enough to go to real parties, they are of course invited to the party. These people are maybe 5 percent of the world. Maybe less. The rest of us would just like to be invited to the party. ..." - Believe Me: Invited to the party "If you look at what makes us all similar, that is love. Parent love, romantic love, family love: love matches up wherever you are. If you're a loving parent, a loving child, a loving partner with a partner who love you back, then that is the same all around the world" "Then there 's the fact that friendships can end, and I don't like endings. Time moves on, proximity and distance change, and sometimes even really strong friendships don's last. That happens all the time, I suppose. A natural progression."