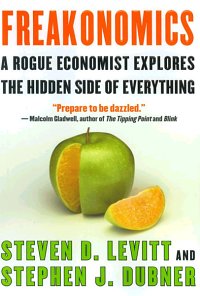 Freakonomics: A Rogue Economist Explores the Hidden Side of Everything

Author: Steven Levitt and Stephen J. Dubner
Language: en
Login to borrow
Freakonomics: A Rogue Economist Explores the Hidden Side of Everything is the debut non-fiction book by University of Chicago economist Steven Levitt and New York Times journalist Stephen J. Dubner. It was published on April 12, 2005, by William Morrow. The book has been described as melding pop culture with economics. By late 2009, the book had sold over 4 million copies worldwide. From Admin: