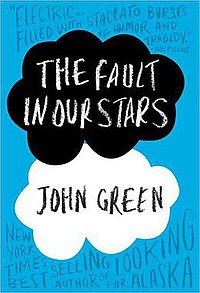 The Fault in Our Stars

Author: John Green
Language: en
Login to borrow
The Fault in Our Stars, published in January 2012, is the sixth novel by author John Green. The title is inspired by Act 1, Scene 2 of Shakespeare's play Julius Caesar, in which the nobleman Cassius says to Brutus: "The fault, dear Brutus, is not in our stars, / But in ourselves, that we are underlings." The story is narrated by Hazel Grace Lancaster, a 16-year-old girl with thyroid cancer that has affected her lungs. Hazel is forced by her parents to attend a support group where she subsequently meets and falls in love with 17-year-old Augustus Waters, an ex-basketball player and amputee. A feature film adaptation of the novel directed by Josh Boone and starring Shailene Woodley, Ansel Elgort and Nat Wolff was released on June 6, 2014.[1] Both the book and its film adaptation were met with strong critical and commercial success. From Admin: